This Toto Drake II review was in the pipeline for a while now. And for good reason too. The Drake, after all, was the most popular and technologically advanced toilet in the mid-range segment for quite some time.

What do an upgrade and a slightly bumped-up price tag give the user? Is it just hype? Aggressive marketing? Turns out that the Drake II is worthy of every accolade that it is garnering. It’s been 7 years since its launch. But it still outsells a lot of newer and fancier toilets. Here’s why.

The Toto Drake II Model CST454CEFG is essentially, the Toto Drake with a few cosmetic and a lot of functional upgrades. For starters, it has an elongated bowl, but with more rounded edges that give it a classic look and appeal.

It boasts of an upgraded rim with the two nozzles (no holes) that create the cyclonic flush. Not only does the absence of the holes make the toilet more aesthetic, it also reduces the possibility of mildew growth in these holes.

The footprint is compact and overall, it looks very stylish. Should blend into any bathroom décor theme without any problems whatsoever. It’s available in five colors. The newest addition is the glossy black, which looks stunning and is lower on maintenance than the lighter colors.

The toilet is 16” tall without the seat. So it should be a comfortable 17” with the seat. Unlike some ADA-compliant toilets that extend to 19”, the Drake II is almost like a universal height toilet. Shorter users should have no problems whatsoever using it.

It ships without a soft closing seat though. But that’s a small quibble that most homeowners are willing to overlook because of the performance of this toilet. It has a standard rough-in and installation should be uneventful for most homeowners.

The Toto Drake II has a 2 1/8″ trapway which is pretty much the standard in most Toto Toilets these days. The wider trapway allows more waste to be sucked in without the risk of clogs.

The standout feature here is the CeFiONtect (strange name) coating, which in essence is a new name for SanaGloss. This ionized coating prevents solids and dirt from adhering to the toilet bowl. This results in fewer skid marks and easy cleaning.

The CeFiONtect coating only needs to be cleaned with a gentle detergent and water.

There were a few reports doing the rounds of messaging boards about the coating wearing off after a while and the underlying surface being rough. The only possible reason why that might happen is due to the use of toxic cleaners. The coating usually lasts for years without a problem. And it is one of the reasons why this toilet remains stain free.

The Toto Drake 2 features the tornado flushing system which is a marked improvement over the older power flushes used in other brands. There are three nozzles, one at the trapway and two under the rim, which create a powerful whirlpool that sucks in the waste completely.

There are users who have used it for years and haven’t used the plunger even once. Why there are very few instances where they had to flush twice.

Refilling is quiet and fast. Also, it uses just 1.28 gallons per flush over the 1.6 gallons in the older models. But there’s no tradeoff in the cleaning quality or performance. If anything, it has only improved. 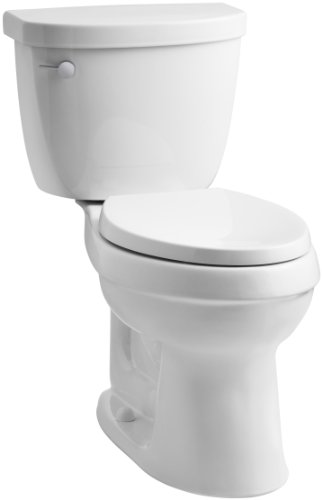 The Toto Drake II shares a lot of similarities with the lower-priced Kohler Cimarron. Both are ADA compliant comfort height toilets. The Drake II stands 16” tall without the seat whereas the Cimarron stands 16.5”. Both are available in five colors. Both have elongated bowls. Almost makes one wonder whether it would the Cimarron would be the more prudent choice. Let’s find out.

The Toto Drake II with its CeFiONtect coating is almost maintenance free. It rarely gets stained and even if it does, a simple rinse with water and any mild detergent suffice. The Cimarron, on the other hand, has a normal, glazed trapway. There’s a marked difference in the two. Also, the Drake II features only two nozzles under the rim in place of the normal water outlets that often get mildew.

The Toto Drake II uses the double cyclone flushing system which creates an efficient whirlpool that sucks in most waste material. It has a map rating of 800 grams. In comparison, the Cimarron uses a single flush gravity system. The Aqua piston canister and the resulting 360-degree flow into the bowl might be more effective than the earlier Kohler models. But it’s clearly not as powerful as the Drake II.

Despite a more pocket-friendly price tag, the Kohler Cimmaron does not match the cleaning efficiency of the Toto Drake II. And that’s what it all boils down to. The Toto Drake II is a toilet that you can install and forget. It performs flawlessly on most occasions and reduces the hassles of frequent maintenance.